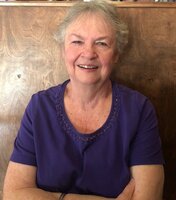 Judith Ann Carbone, 79, of Florence, AL, passed away August 2, 2022 at her home. Judith was a native of Chicago, IL. She was a member of St. Michael’s Catholic Church in St. Florian, AL and also a member of Florence Hi Neighbors. She always had a passion for all of the beautiful things in life. Anyone who knew her knew her love for her family and friends. She always had a smile on her face, and not a mean thing in her heart. Judith is survived by: Son: John R. Carbone and wife Ana of Sao Paulo, Brazil Daughters: Nicole M. Hoehler and husband Eric of Florence, AL & Dorann L. Ferguson and husband John of Denver, CO Grandchildren: Johnny Carbone, Alexis Hoehler, Ivy Ferguson, and Simon Ferguson Sisters: Frances Basso and Diane Haertel Sister-In-Law: Elizabeth Carbone She was preceded in death by: Husband: John Anthony Carbone Parents: William Vanderpool and Frances Marie Dillon Vanderpool Brother-In-Law: Richard Carbone Visitation will be Monday, August 8, 2022 from 5-8:00 P.M. at Greenhill Funeral Home. The funeral service will be Tuesday at 9:00am at St. Michael’s Catholic Church in St. Florian, AL with Abbot Cletus officiating. The family asks that if you would rather make a donation, please consider: St. Michael’s Catholic Church or Florence/Lauderdale Animal Shelter.