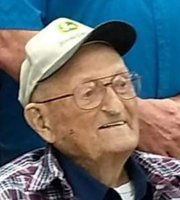 Neely Gwen McCain, 93, of Lexington, AL, passed away April 25, 2021 at his home. Mr. McCain was born January 29, 1928 to Richard Coleman and Verna Blanch Thomas McCain in Lexington, AL. At age 15 he accepted Christ and followed in baptism at Nebo Cumberland Presbyterian Church. Within a year he was teaching Sunday School and over the next 50 years would lead the Young Married, Adult Married and Men classes. He was a lover of gospel music and the message in the songs. One of his greatest joys in life was leading the congregational singing at Nebo Cumberland Presbyterian Church from the time he was 27 years old. He was also a faithful member in the church choir and a hardworking elder; Nebo was an extension of his home and family, serving Christ alongside his wife, in every capacity. Gwen raised 4 sons, coached their little league baseball teams, and frequented horse shows with them for years. He retired from Reynolds Alloys in January of 1993 after a 35 year career. He then went to work on his farm full time after retiring. He had a reputation for cooking up a great chicken or goat stew and growing a big garden. He loved going to the McCain Family reunions and looked forward to them every year. He would always end the prayer before the meal with let’s hold hands and sing Bless Be The Tie That binds. To know him was to love him; he never met a stranger. He was a generous soul that would always help a neighbor in need. One of his favorite jokes was “See you in the funny papers, on the Popeye page”. He is proceeded in death by his wife Mary Olene Putman McCain, sister Hattie Rene McCain Hunt (Donnie) brothers Albert Newton McCain (Thetus), James Coleman (Buck) McCain, Terrence Robbins McCain, brother and Sister in laws Bailey Leopard, Stancell Putman (Helen), Willey Dee Putman, Gerald Putman (Martha), Euell Cole, Euyls Putman (Pat), Sharon Putman Trousdale, Bobby Hancock, also an infant baby brother, and his in-laws Tollie Minton Putman and Lutie Balch Putman. He is leaving behind a family with lessons and memories to guide them through the days ahead -Sons: Dwight McCain (Brenda), Marty McCain (Lisa), Kelvin McCain, Mike (Moe) McCain; Grandchildren: Amy McCormack (Mike) Steven McCain, Jamie McCain, Tracy Garner (Jenard), Ashley Butler (Cory) Dusty McCain (Beth) Austin McCain (Bailey), Kyle McCain, Kaleb McCain; Great Grandchildren: Danielle Canup (Brooks), Mason McCormack, Jabarui, Jeremiah and, Jaakan Garner, Camron, McKenzie, Cooper and Isabella Butler, Audrey McCain, and Easton McCain; Sisters Rose McCain Hancock, Levelle McCain Leopard; Sister in laws Violet McCain, Helen Putman Cole; and Brother in law Levon Trousdale. Visitation will be Wednesday, April 28, 2021 from 11:00 A.M. until 1:00 P.M. at Nebo Cumberland Presbyterian Church. The funeral service will follow at 1:00 P.M. at the church with Bro. Ronnie Burgess & Bro. Jenard Garner officiating. Burial will be in Nebo Cemetery. Pallbearers will be his grandsons. Honorary pallbearers will be T. Wright, Colin Ritter, Waylon Purser, and Randy Lawrence. In lieu of flowers, the family requests that donations be made to Nebo Cumberland Presbyterian Church. The family wants to especially thank Paula Dillon, Patricia Thompson, and Jennifer Melson for their love and support during this difficult time. Greenhill Funeral Home is in charge of arrangements.