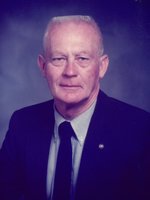 B T Hine, 94, of Killen, AL, passed away February 7, 2021 at NAMC. B T was a retired auto salesman at Thornton Chrysler & Dodge, where he worked for 35 years and a member of the Methodist faith. He was a United States Army Veteran of WWII. B T loved little children, turkey hunting, water skiing, bowling and his special cat Ugly. B T is survived by: Daughter: Patrecia Hine Barels Sister: Elaine Hine Grandchildren: Kyle Barels and Liza Brown (Tim) Great-grandchild: Evan Sharpe He was preceded in death by: Parents: Charles Franklin Hine and Alma Ann Powell Hine Brothers: Willie Hine, Homer Hine, Fulton Hine, and Rutledge Hine There will be a private, family only service held for B T with Reggie Bruce officiating. Burial will be at Emmaline Stutts Cemetery with full military honors. Pallbearers will be Kyle Barels, Tim Brown, Lexie Holden, Paul Howell, Webb Wright, & Dale Gamble. Honorary pallbearers will be Willie Tee Hill, Jimmie Kennedy, John Thompson, & Leon Oliver. The family would like to thank the Doctors and the Nurses on the 2nd and 5th Floors at NAMC. They would also like to thank Webb Wright for his care and friendship. In lieu of flowers, donations may be made to St. Jude’s Children Hospital in B T‘s memory. Greenhill Funeral Home is in charge of arrangements.