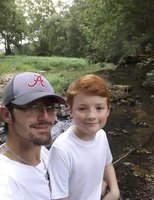 It is with such sadness and heartbreak, that we announce the passing of Anthony James Vines, age 32 of Green Hill/Center Hill Alabama. He was known to everyone as Tony, except to Easton Anderson Vines, age 10, he was daddy and oh, how he worshipped his boy. Tony and Easton were thick as thieves. Tony was the adored son of James Lawrence Vines and Deborah Lynn Cape, both deceased. Tony had several siblings who loved him dearly, Stacy Ritch (Todd),Jimmy Vines (Lisa),Brandon Gieske, Shelly Vines Hart (Steven), Shane Vines, Jeremy Gieske (Dawn) and Tasha Gieske. Tony had several nieces and nephews who loved their fun uncle, and a multitude of friends and family. Tony was larger than life, and far bigger than words. He’s always been right behind me. I have no doubts that Tony still has my back and had all of our backs at that. Wherever his spirit is, I know he’s pulling for our whole family and his many friends. Tony, you showed us all what it means to love and to be loyal to our family. We’ll try to live up to it. Tony was a man who was defiant and unwilling to settle for less. He lived a principled life underpinned by a strong sense of right and wrong. Tony was not a cruel man and he wanted his son to understand that nothing can be gained from holding a grudge or leaving any issue that was very wrong unclear. He spoke out when it really counted, his strong principles did not allow him to let something wrong stand unchallenged. They cared enough to act - to follow through. He never let anyone or anything stand in the way of making things right. We can only imagine how much more he could have accomplished in his life were it not for his illness. My brother, Tony, was a business man who saw opportunity and made the most of it. One could say that what he touched turned to gold because he had a vision and his vision prompted him to act. Boy, did he love our family farm and them chickens. Tony left us much too soon, but he left us with an incredible model of how to live our lives. Do what makes you happy, be humble, live within your means, be there for your family, get outdoors and every chance you get, take risks. For you, Tony, we’ll do our best and we’ll do what’s right. I’d like to close with a quote that means a lot to us and something I think Tony would appreciate: If you’ve had a kindness done to you — pass it on.   It was not meant for you alone — pass it on.   May it linger through the years — may it dry another’s tears   Till in Heaven it appears — pass it on.  May we all go forward with strength and courage as Tony did.  Pass it on. Until we meet again, in our hearts is where we’ll keep you, brother. I love you big. Visitation with family and friends will be Wednesday, October 7, 2020 from 5-7:00 P.M. at Greenhill Funeral Home. Greenhill Funeral Home is in charge of arrangements.